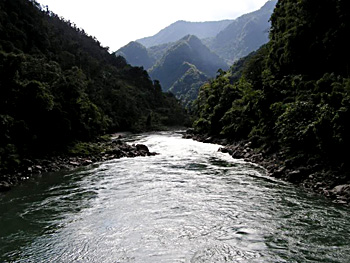 Originating from the western part of Mount Poro the Subansiri River enters India through a gorge near Gerukamukh. The River has been subjected to change in geographic character. This change has been recorded since 1919. There has been alteration in the direction of flow of the river. The change in the hydro logic regime of the river is due to the earthquake in Assam and the flood in 1950. The earthquake caused landslide and blockade of the river channel. There was an outburst of flood in the river. The sudden increase in water discharge and sediment load altered the stable hydro logic regime of Subansiri thereby bringing changes in the river channel. The River is 442 kilometers long. It has a drainage basin of 32,640 sq km. The maximum observed discharge of the river was 18,799 cubic meters per second and the minimum is 131 m 3/s.

Originating in the Himalayas in China the Subansiri River spans from Tsona Dzong up to the great loop of the Tsangpo in Tibet. The river has a run of 170 km in Tibet and 250 km in Himalayas. From there it  flows east and southwest into India. It descends through rainforests in Arunachal Pradesh. It flows south  to the Assam Valley. Subansiri joins the Brahmaputra in the Lakhimpur district. The river has a run of 86  km in the plains of Assam. The river maintains a stable course but entering Assam it becomes unstable.  The riverbed in Assam consists of sand, gravel and silt.

Importance of Subansiri in Lakhimpur

The Subansiri River is the lifeline of the people of Lakhimpur and Dhemaji districts. Subansiri provides  diverse habitat in its downstream for living biota such as stream, riparian zones and wetlands etc. The  riparian wetlands are ecologically and economically important. Subansiri fishing is also famous among people.

River Rafting and Fishing in Subansiri

Subansiri River offers tourists to enjoy river rafting. River rafting in Subansiri is an exciting and
adventurous event but at the same time is a challenging task. While rafting one can have the scenic view of the greenery by the side of the river as the natural beauty by the side of the river is amazing and worth viewing. Subansiri River also offers tourists to enjoy fishing trips. Fishing here is all the more an exciting experience as one gets the opportunity to fish the masher in Subansiri.

Explore more about Geography of Lakhimpur